Ysgol Glannau Gwaun is a new primary school in the heart of Fishguard.

Previously operating on two sites, in Victorian and 1960s buildings at the end of their useful lives, it brings together 290 pupils as well as the North Pembrokeshire SEN Unit.  Its new location is a brownfield site overlooking the town, on which the town’s former grammar school stood.

The project was fully designed by Pembrokeshire County Council’s architects and structural, services, highway and drainage engineers as well as landscape architects – along with in-house quantity surveying, CDM co-ordination and clerk of works services – and run as a traditional contract.

The site, though in a prominent position with incredible views over Fishguard harbour and the Preseli Mountains, was extremely challenging.

It has a high-voltage electricity cable and a high-pressure gas main running beneath a historic bridleway that bisects the site and forms part of the National Cycle Network.

The site sits on a steeply sloping hill, surrounded by residential development – built directly onto the same seam of hard igneous rock, comprising Preseli Bluestone with no more than 300 mm of topsoil cover.  The existing storm drainage possessed no further capacity to accommodate surplus run-off.

The site is also subject to a microclimate combining a strong prevailing southwesterly wind and frequent salt-laden coastal gales blowing in from Fishguard Harbour.

The design of the school responds equally well to the context as well as the needs of twenty-first century learning.

It is a contemporary design which works with the contours of the land and references the surrounding coastal environment in its use of light and colour.

Light and ventilation, as well as the amazing views, were the drivers for the design team.  The schools that the children had previously occupied either had windows that were so high they could not see out of them, or caused the classrooms to badly overheat in the summer.

The teaching areas wrap around an enclosed courtyard playground.  This protects the playground from the road and shelters it from the southwesterly winds and sea breezes; it also acts as an acoustic barrier to traffic noise.

All south-facing classrooms are shaded and protected from the elements by external canopies, and the majority of classrooms open onto playgrounds or balcony play-spaces.

The school itself operates predominantly on a single level.  However, to minimise the need to excavate the hard igneous rock, the sprinkler tank and three classrooms are located on the lower level where the land falls away.

The colour scheme of the school was inspired by the sea and sky to reflect the coastal nature of the town as well as the changing seasons over the Preseli Hills, which are visible from the site.

Special attention was paid to the internal design in order to assist children in the North Pembrokeshire Special Needs Unit.  This included a calming colour scheme and dyslexia-friendly signage.

The building has received a high interim stage BREEAM ‘Excellent’ rating.  It’s sister school at Neyland received the 2012 award for the highest-scoring BREEAM building in Wales in the Education category earlier in the year and the environmental strategy was identical.

The school is located in the middle of Fishguard – which cuts down on car use, and is next to a bridleway and stretch of the National Cycle Network.

It is designed and constructed to high standards being well insulated and very airtight, thereby ensuring the efficient use of natural resources heating it.

It is completely naturally ventilated – even the kitchen – by large openable windows, roof windows and windcatchers.  This contributes to the high levels of natural lighting which, coupled with low-energy lighting on daylight sensors, reduces electricity use. 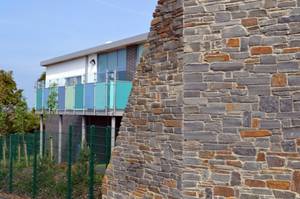 A combined heat and power (CHP) unit generates over 50% of the building’s electricity, as well as running the low-temperature underfloor heating and, together with a solar-panel array, providing hot water.

The amount of embodied carbon has been considered in the design.  In excess of 20% of recycled materials are used – recycled aluminium windows, recycled steel and over 4,000 tonnes of crushed, excavated rock.

The majority of materials are ‘A’ or ‘A+’-rated, have low VOC content and recognised chain-of-custody certification.  Many local materials were used such as Welsh Sweet Chestnut cladding, thereby cutting down on ‘material miles’.

Because of the rock, little rainwater is absorbed so a sustainable drainage system (SUDS) was installed.  This attenuates the water in large tanks beneath the staff car park before releasing it into the sea.

Harvested rainwater flushes the toilets and water-saving fittings ensure that less than 1.5m³ of water per person per year is used.  The landscaping relies only on natural precipitation.

As part of our commitment to the environment – and the aspiration to divert as much waste as possible from landfill – over 4,000 tonnes of igneous rock were extracted by a breaker and crushed on site.  This avoided approximately 800 lorry journeys through the tight roads of this small town.

A ‘Bat Room’ has been incorporated into the design to cater for the bats that inhabited the previous, demolished building.  Swift boxes were inhabited even before the contractor left site.

It was a challenging site that required the buy-in of the local community.  A full DQI (Design Quality Indicator) consultation was undertaken.

The contractor achieved a ‘Considerate Contractor’ score of 36 because of their pro-active attitude as well as their sponsorship of local arts and music festivals. 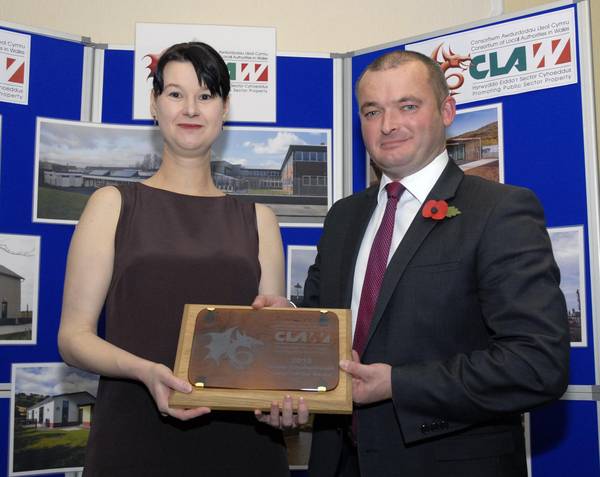